After the rust string overview of its internal substructures, let’s see if c++ QString storage is more light, but first we’r going to take a look to the c++ standard string object:

At first sight we can see the allocation and deallocation created by the clang++ compiler, and the DAT_00400d34 is the string.

If we use same algorithm than the rust code but in c++: 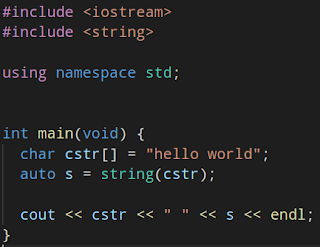 We have a different decompilation layout. Note that the Ghidra scans very fast the c++ binaries, and with rust binaries gets crazy for a while.
Locating main is also very simple in a c++ compiled binary, indeed is more  low-level than rust. 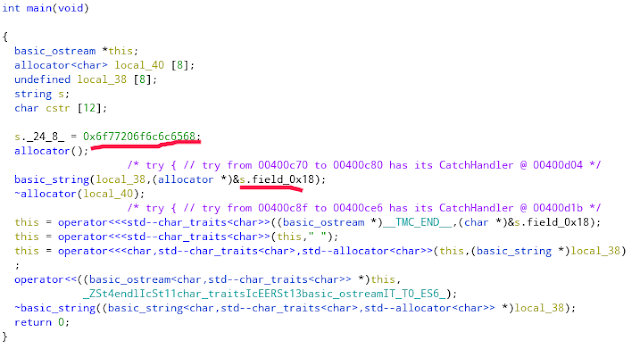 And basic_string generates the string, in the case of rust this was carazy endless set of calls, detected by ghidra as a runtime, but nevertheless the basic_string is an external imported function not included on the binary.

The string is on the stack, and it’s very curious to see what happens if there are two followed strings like these:

Let’s see the great and featured QString object defined on qstring.cpp and qstring.h

Some QString methods use the QCharRef class whose definition is below:

Searching for the properties on the QString class I’ve realized that one improvement that rust and golang does is the separation from properties and methods, so in the large QString class the methods are  hidden among the hundreds of methods, but basically the storage is a QStringData *;

After removing the methods of QStringData class definition we have this:

Which is pretty clear, there is one QChar pointer and a char pointer, then define in compiler time the size of the unsigned length len.

So two pointers and the unsigned integer length.

and a set of enums for decribing the type of byte.

ucs is the two bytes unicode considering latin1 only one byte, if the ushort is > 0xff it return 0.

we have some quite nice methods implemented on the QChar class to classify the byte stored.

But lets see the real storage of a QString object:
GCC and doesn’t recognize well the object, the print and display are the incomplete. 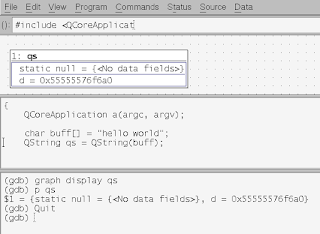 Kdbg display sort of the substructures with the text length: 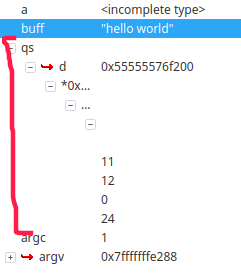 In the practice the QString is an object that helds the two dwords pointer to the metadata, then a pointer to the end, and then the null terminated string text. 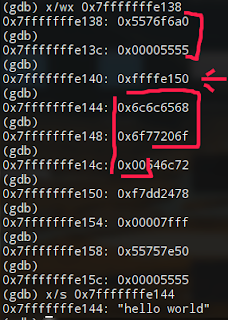 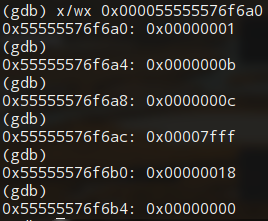 Here we have some metadata, like the string size, type of data, and so on.

So … is it possible to overlap the metadata of a string and perform an QString overflow? the answer is yes if the previous string is  a controlled char * then we can modify the metadata pointer to our buffer.

Binary size benchmark:
Some curious stats about the binary file size, which are not conclusive because some standard libs are include on the binary.