Music Production Studio in a Box 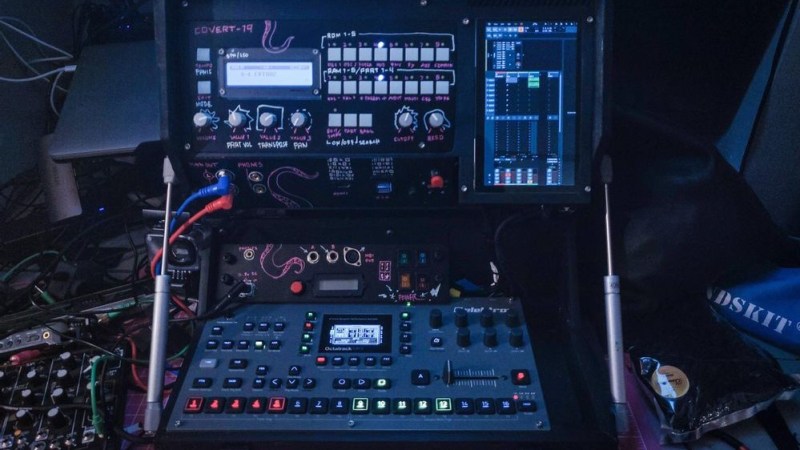 [Emil Smith] is an electronic music producer in the Greater London area. He spent a lot of time commuting in and out of central London, so he decided to put together COVERT-19, a portable music production studio. After making a couple of prototypes, [Emil] settled on what he needed from his portable studio: a sampler, a sequencer, a synthesizer, a mixer, and a way to record his work.

[Emil] didn’t overlook any details with his mechanical design. Taking the beautiful London weather into account, he designed a laser-cut plywood case that has a neoprene foam gasket to keep water out when closed and put all of the inputs and outputs on the interior of the case. Inside the case, he opted for machine screws with threaded inserts so he could disassemble and reassemble his creation as often as he liked, and he included gas springs to keep the studio open while he’s making music. [Emil] even thought to include ventilation slots to keep the built-in PC cool!

A portable studio is useless without a power supply, so [Emil] taught himself some circuit theory and bought his first soldering iron in order to create the custom power delivery system. Power is supplied by a battery of twelve 18650 cells with switching converters to supply the three different voltages his studio needs. Even with all of his music-making gear, he manages to get about four hours of battery life!

The music-making gear consists of a sequencer and synthesizer as well as a touch-screen NUC PC running Xubuntu. The built-in PC runs software that allows him to mix the audio, apply extra effects, record his creations, and save his patches when he’s done working. The system even has an extra MIDI output and audio input to allow it to incorporate an external synthesizer.

Sanity Check your Engines with this Dynamometer