You Otter Be Able to Stream that Audio: Open Hardware Eclipses Chromecast Audio 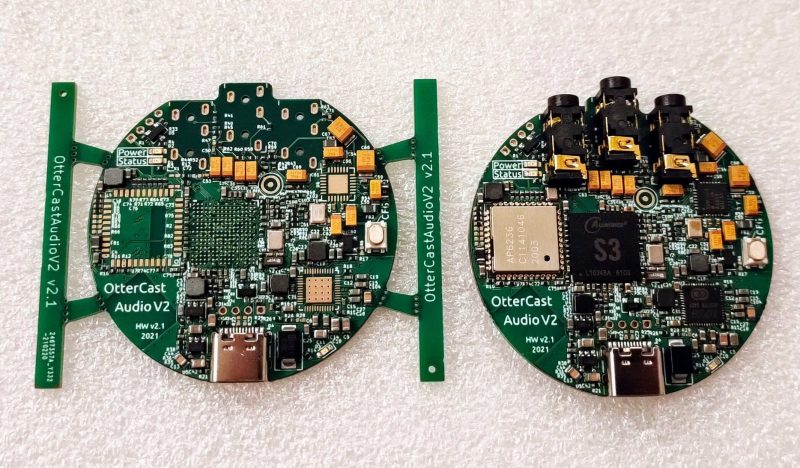 When Google halted production of the Chromecast Audio at the start of 2019, there was a (now silent) outcry. Fans of the device loved the single purpose audio streaming dongle that delivered wide compatibility and drop-dead simplicity at a rock bottom $35 price. For evidence of this, look no further than your favorite auction site where they now sell for significantly more than they did new, if you can even find an active listing. What’s a prolific hacker to do about this clear case of corporate malice? Why, reinvent it of course! And thus the Otter Cast Audio V2 was born, another high quality otter themed hack from one of our favorite teams of hardware magicians [Niklas Fauth, Jan Henrik, Toble Miner, and Manawyrm].

The Otter Cast Audio is a disc about the shape and size of standard Chromecast (about 50mm in diameter) and delivers a nearly complete superset of the original Chromecast Audio’s features plus the addition of a line in port to redirect audio from existing devices. Protocol support is more flexible than the original, with AirPlay, a web interface, Spotify Connect, Snapcast, and even a PulseAudio sink to get your Linux flavored audio bits flowing. Ironically the one thing the Otter Cast Audio doesn’t do is act as a target to Cast to. [Jan] notes that out of all the protocols supported here, actual Cast support was locked down enough that it was difficult to provide support for. We’re keeping our fingers crossed a solution can be found there to bring the Otter Cast Audio to complete feature parity with the original Chromecast Audio.

But this is Hackaday, so just as important as what the Otter Cast Audio does is how it does it. The OtterCast team have skipped right over shoehorning all this magic into a microcontroller and stepped right up to an Allwinner S3 SOC, a capable little Cortex A7 based machine with 128 MB of onboard DDR3 RAM. Pint sized by the bloated standards of a fully interactive desktop, but an absolutely perfect match to juggling WiFi, Bluetooth, Ethernet, and convenient support for all the protocols above. If you’re familiar with these hackers’ other work it won’t surprise you that what they produced here lives up to the typical extremely high quality bar set by such wonders as this USB-C adapter for JBC soldering iron handles and this TS-100 mainboard replacement.

It sounds like a small production run might be on order in the future, but until then production files optimized for a particularly popular Chinese manufacturer are provided, with complete BOM and placement files. It sounds like turnkey production costs from that manufacturer are a shockingly reasonable $10 (total) per unit with most components, and come to a still-reasonable $22 with the remaining self-sourced components manually installed.

For a demo of the finished goods, check out the tweet embedded after the break.