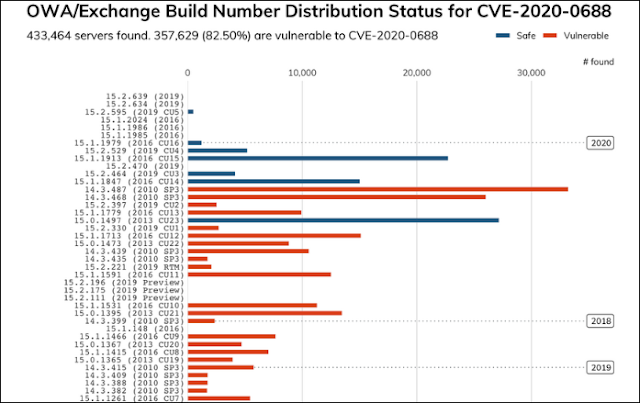 tl;dr — it’s the title of the post: “If You Can’t Patch Your Email Server, You Should Not Be Running It.”

I read a disturbing story today with the following news:

“Starting March 24, Rapid7 used its Project Sonar internet-wide survey tool to discover all publicly-facing Exchange servers on the Internet and the numbers are grim.

To make matters even worse, some of the servers that were tagged by Rapid7 as being safe against attacks might still be vulnerable given that ‘the related Microsoft update wasn’t always updating the build number.’

They also found 10,731 Exchange 2007 servers and more than 166,321 Exchange 2010 ones, with the former already running End of Support (EoS) software that hasn’t received any security updates since 2017 and the latter reaching EoS in October 2020.”

In case you were wondering, threat actors have already been exploiting these flaws for weeks, if not months.

Email is one of, if not the most, sensitive and important systems upon which organizations of all shapes and sizes rely. The are, by virtue of their function, inherently exposed to the Internet, meaning they are within the range of every targeted or opportunistic intruder, worldwide.

In this particular case, unpatched servers are also vulnerable to any actor who can download and update Metasploit, which is virtually 100% of them.

It is the height of negligence to run such an important system in an unpatched state, when there are much better alternatives — namely, outsourcing your email to a competent provider, like Google, Microsoft, or several others.

I expect some readers are saying “I would never put my email in the hands of those big companies!” That’s fine, and I know several highly competent individuals who run their own email infrastructure. The problem is that they represent the small fraction of individuals and organizations who can do so. Even being extremely generous with the numbers, it appears that less than 20%, and probably less than 15% according to other estimates, can even keep their Exchange servers patched, let alone properly configured.

If you think it’s still worth the risk, and your organization isn’t able to patch, because you want to avoid megacorp email providers or government access to your email, you’ve made a critical miscalculation. You’ve essentially decided that it’s more important for you to keep your email out of megacorp or government hands than it is to keep it from targeted or opportunistic intruders across the Internet.

Incidentally, you’ve made another mistake. Those same governments you fear, at least many of them, will just leverage Metasploit to break into your janky email server anyway.

The bottom line is that unless your organization is willing to commit the resources, attention, and expertise to maintaining a properly configured and patched email system, you should outsource it. Otherwise you are being negligent with not only your organization’s information, but the information of anyone with whom you exchange emails.