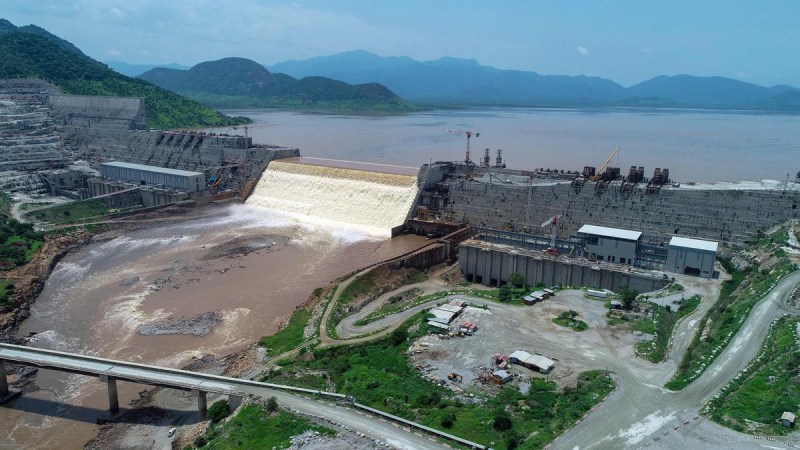 Ethiopia is in the midst of a major nation-building project, constructing the Grand Ethiopian Renaissance Dam (GERD). Upon completion, GERD will become the largest hydropower plant in Africa, providing much needed electricity for the country’s growing population.

The project dams the Blue Nile, a river which later flows into neighbouring Sudan, where it merges with the White Nile and then flows on to Egypt. Like all rivers that flow across political boundaries, concerns have been raised about the equitable management of the water resources to the benefit of those upstream and down. Too much water dammed upstream in GERD could have negative effects on Egyptian agriculture reliant on river flows, for example. Efforts are ongoing to find a peaceful solution that suits all parties. Recently, suggestions have been made to supplement the dam’s power output with solar and wind to minimise disruption to the river’s users.

Of course, there’s nothing physically stopping the Ethiopian dam from simply holding as much water as is desired and using it as it sees fit. However, farmers downstream don’t tend to appreciate their precious water supply suddenly drying up to keep the lights on across the border. Both Egypt and Sudan also dam some of the river flow for their own hydroelectric dams too. Thus, it’s in their interests that the river continues to flow and flow well. Talks between the countries involved have repeatedly stalled, with no easy solution in sight.

A recent paper published in Nature by researchers from Vrije Universiteit Brussel and KU Leuven, proposes a plan that involves leveraging a combination of resources to maximise the benefit to all parties. The typical operation of a hydropower plant calls for filling up the dam from the river flow in the rainier season, and emptying it in the drier season. Flows are managed to allow production of electricity year-round. Obviously, the more water that is kept in the dam, the more electricity can be generated by letting it flow out later. GERD is big enough that it could dam the river’s entire annual flow if so desired. The action of damming the river alters the natural flow, with the river’s water level depending on how much water is allowed to flow out of the dam rather than following normal rain patterns. In drier years, most of the water could be kept in the dam, heavily reducing flow to countries downstream.

The GERD project intends to generate a great deal of electricity, of course, and thus dam a large amount of the river’s annual flow. However, in Ethiopia, it bears noting that there is a great deal of sunshine and wind, particularly in seasons opposite to those in which Blue Nile flow is the greatest. Thus, solar and wind generation resources could be used in concert with GERD. In the hotter, drier, windier season, solar and wind would provide a lot of electricity, reducing the amount of water required to be dammed for hydropower — water which would then flow on to agricultural users downstream who need it most at this time. Conversely, when the wetter months come through, water is in abundance. With plenty to go around, hydropower production can be stepped up at this time to offset the lower production of wind and solar assets. With more generation from GERD’s hydropower in the rainy season, this keeps the river level high at the expected time as per the natural seasonal variations. This is ideal as existing users — whether agricultural or other hydroelectric dams — have built their operations around this flow regime. Maintaining seasonality is often key to a river’s ecological health, too.

It’s a great example of how multiple sources of renewable energy can be combined to cover off each other’s blind spots. It also offers a tidy solution to the issue of keeping the Blue Nile flowing with regularity for down stream users, potentially making the political issue easier to solve. However, there is no free lunch. The plan requires significant investment in solar and wind assets, totalling around 3 MW of generation capacity in the dry season. It’s not outside the realms of possibility, however — Ethopian plans for many megawatts of renewable energy are already on the table.

There are other possible benefits too. With such a large dam upstream, additional water capture in wetter years could be used to supplement outflows in drier years, smoothing out natural annual variations. This could be of particularly benefit to stabilising agricultural yields that would otherwise be at the mercy of the natural available water supply.

Whether the proposal will be enough to see the three parties come to an agreement is yet to be seen. However, it serves as a great template to work from for hydropower projects looking to make the most out of the power available while minimising negative impacts on river communities. With just a few years left before GERD is fully operational, time is of the essence if the project is to continue smoothly.

A DIY Enclosed Motorcycle To Keep You Dry In The Rain