Airports Are Now AirBNBs for Honeybees 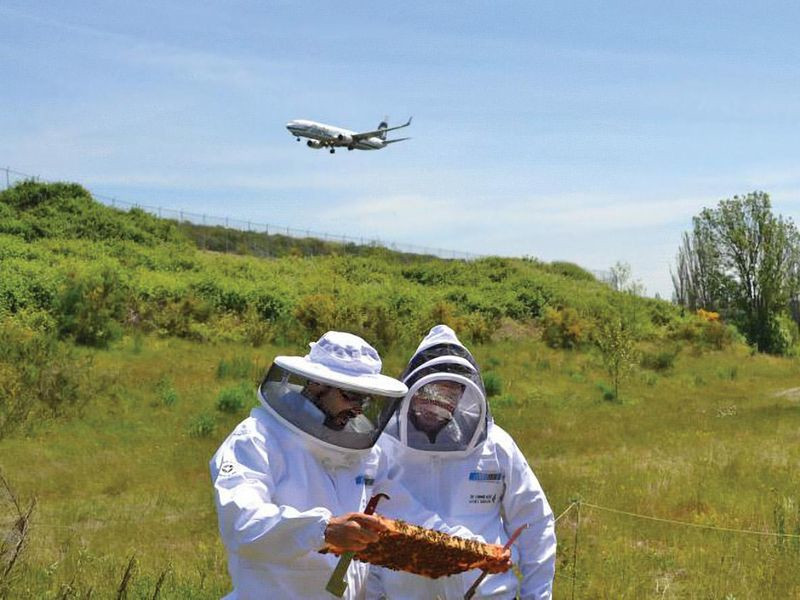 In the summer of 2012, honeybees swarmed the Pittsburgh airport, probably because the conditions are favorable there. Like many airports, the tarmac is surrounded by wild, wide-open fields that exist to contain the cacophony. And a couple of nearby creeks are dotted with plenty of forage-worthy wildflowers.

Now, nearly a decade later, the airport is home to 110 colonies that house around 4 million honeybees. And they aren’t alone. Several other US airports are getting in on the apiary action, including O’Hare, Sea-Tac, and Minneapolis-St. Paul.

The relationship between honeybees and airports is a symbiotic one — the honey the bees produce is a litmus test for air pollution levels around the airport, which must fall within regulations. German airports have employed bees as ‘bio-detectives’ for over twenty years, and they give the honey away for free inside the terminal. It’s okay, though — analysis reveals that the hydrocarbon and heavy metal levels in the airport honey aren’t any higher than honey from non-industrial bees.

Given that honeybees pollinate around $15 billion in crops annually in the US alone, it’s a wonder that we aren’t doing everything possible to fight colony collapse disorder and other problems around the world. This mysterious issue has grown in the last few years, and 2020 saw highest death toll since 2016. Colony collapse disorder aside, plenty of problems persist for our fuzzy friends — pests, pesticides, pathogens, and poor nutrition.

What’s the deal with bees, anyway? How do they fly? Because they aren’t supposed to fly.