Look Out Below! China’s Heavy-Lift Rocket Due for Uncontrolled Reentry Within Days 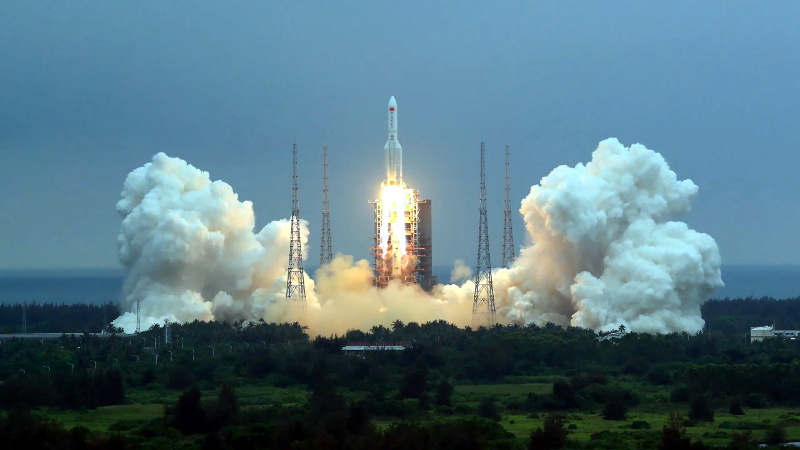 On April 28th, China successfully put the core module of their Tianhe space station into orbit with the latest version of the Long March 5B heavy-lift booster. This rocket, designed for launching large objects into low Earth orbit, is unique in that the 33.16 m (108.8 ft) first stage carries the payload all the way to orbit rather than separating at a lower altitude. Unfortunately, despite an international effort to limit unnecessary space debris, the first stage of the Long March 5B booster is now tumbling through space and is expected to make an uncontrolled reentry sometime in the next few days.

The massive booster has been given the COSPAR ID 2021-035-B, and ground tracking stations are currently watching it closely to try and determine when and where it will reenter the Earth’s atmosphere. As of this writing it’s in a relatively low orbit of 169 x 363 km, which should decay rapidly given the object’s large surface area. Due to the variables involved it’s impossible to pinpoint where the booster will reenter this far out, but the concern is that should it happen over a populated area, debris from the 21 metric ton (46,000 pound) booster could hit the ground.

This is the second launch for the Long March 5B, the first taking place on May 5th of 2020. That booster was also left in a low orbit, and made an uncontrolled reentry six days later. During a meeting of the NASA Advisory Council’s Regulatory and Policy Committee, Administrator Jim Bridenstine claimed that had the rocket reentered just 30 minutes prior, debris could have come down over the continental United States. Objects which were suspected of being remnants of the Long March 5B were discovered in Africa, though no injuries were reported.

China’s first space station, Tiangong-1, made an uncontrolled reentry of its own back in 2018. It’s believed that most of the 8,500 kg (18,700 lb) burned up as it streaked through the atmosphere, and anything that was left fell harmlessly into the South Pacific Ocean. While small satellites are increasingly designed to safely disintegrate upon reentry, large objects such as these pose a more complex problem as we expand our presence in low Earth orbit.

A Single Identity Management and Security Strategy for Hybrid Clouds

5 ways to protect your company from cyber-attacks