Could Seven Gamers Play Quake on Just One 1996 SGI Machine? 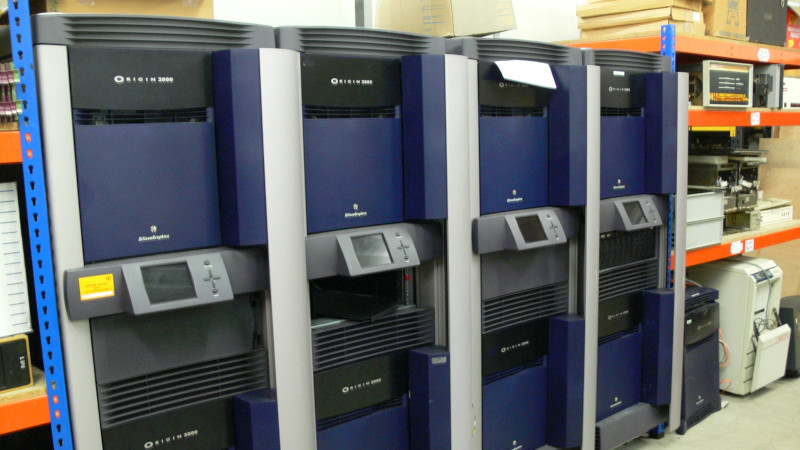 [Linus Tech Tips] undertook a fun experiment a few years back. By running multiple virtual machines on a single tower PC with tons of RAM and GPUs, it was possible to let seven gamers play on a single rig at once. [CelGenStudios] found the idea intriguing, and has theorised that the same feat could be possible on mid-1990s Silicon Graphics hardware.

The idea is to use the Origin 2000 server as the base. These didn’t ship with any form of video output or even a keyboard and mouse interface. However, by substituting in the IO6G module from the Onyx2 machine, and SI graphics cards from the Octane, it’s possible to get graphics and input up and running. With multiple graphics cards and a few CAD DUO boards installed via a PCI adapter called the “shoebox”, there’s provisions for up to four separate monitors, keyboards and mice. With all this hardware, it’s theoretically possible for four users to login to the X server running in the IRIX OS on the Origin 2000 machine. Then, it’s a simple matter of firing up four instances of Quake and a dedicated server and you’re up and gaming.

[CelGenStudios] goes so far as exploring the limits of the supercomputer-grade hardware, suggesting that 7 players or more could be possible. Unfortunately, SGI hardware isn’t easy to come by, nor is it cheap, even decades after release — so thus far, the concept remains untested. We’d dearly love to see such a setup happen at QuakeCon or a hacker con, though, so if you pull it off, you know how to call. We note there’s a few Octane 2000s at the Jim Austin Computer Collection, so perhaps they might be the ones to achieve the feat.

In the meantime, check out a practical exploration of the concept on modern hardware with the original [Linus Tech Tips] project. The basic theory is simple – create a hugely powerful PC, with a beefy CPU, plenty of RAM, and one graphics cards for each of the seven players. They run multiple virtual machines and managed to deliver a full 7 player experience running off just one CPU.