TypeMatrix EZ-Reach 2030 is Better Than Your Laptop Keyboard 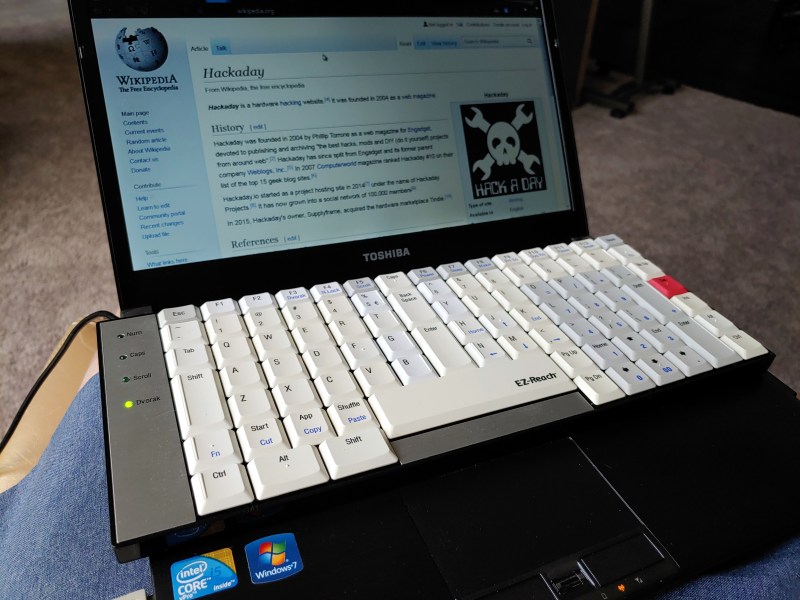 Maybe you’re not ready to take the leap into a full-on ergonomic split keyboard. That’s okay, that’s cool, that’s understandable. They’re weird! Especially ones like my Kinesis Advantage with the key bowls and such. But maybe your poor pinkies are starting to get tired and you’re ready to start using your thumbs for more than just the space bar. Or you want to be able to type ‘c’ properly, with your middle finger.

In that case, the TypeMatrix could be the keyboard for you. Or maybe for travel you, because it’s designed as a quasi-ergonomic, orthonormal layout travel keyboard to pair with your laptop, and as such it sits directly over a laptop keyboard without blocking the track pad. (How do people use those things, anyway?)

Of course, you could use this as a desktop keyboard as well, although it’s unfortunate that Control and Shift are stuck on the pinkies. More about that later.

When I saw this keyboard on eBay, I was attracted by two things: the layout, and the dedicated Dvorak light. (And, let’s be honest — the price was right.) I’ve always found myself generally turned off by chocolate bar-style ortholinear keebs because they’re so incredibly cramped, but this one seemed a more acceptable because of the slight split.

The first thing I noticed was the fantastic number pad integration. The different colored keycaps are a nice touch, because the gray makes the number pad stand out, and the red Delete is easy to find since Num Lock is squatting in the upper right corner. Why does Delete always feel like an afterthought on compact keebs? I also like the location of the arrows, and it makes me think of the AlphaSmart NEO layout. Unfortunately, it comes at the cost of burying the right hand Enter down in no-man’s land where you can’t exactly hit it blindly with great accuracy right away. If only you could swap Shift and Enter without messing up the number pad!

The vertical Shifts, Enter, and Backspace are interesting, as is the forced relocation of Caps Lock, which has been relegated to the middle top between F5 and F6. There are a ridiculous number of homing bumps and bars on this thing, which I think is really cool. Ten of the keys have homing bumps, and seventeen of them have homing bars. One has both — the left hand Function key, to distinguish it from Control. That makes 30% of the keys with homing bits, compared to just two homing anything (F and J) on TKL keebs or three things (the 5 in the number pad) if you have a full keyboard.

In theory, the homing bar would help you hit that right hand Enter if you wanted to use it outside of the number pad. I did read a review of the EZ-Reach that said the homing bits are a tad sharp when the keyboard is brand new, but these feel fine to me.

Note that all the inside keys except the Fs have a homing bar to help you navigate the middle keys without looking. I hesitate to call them thumb keys, because I doubt you’re supposed to use your thumb to hit the middle back space, though I suppose if your fingers are long enough, suit yourself. I myself cannot. I so wish that TypeMatrix had not wasted so much real estate on the space bar, which is really more like a space slab. It’s a sidewalk of a space bar. And then there’s all that unused space underneath the space slab? Infuriating. 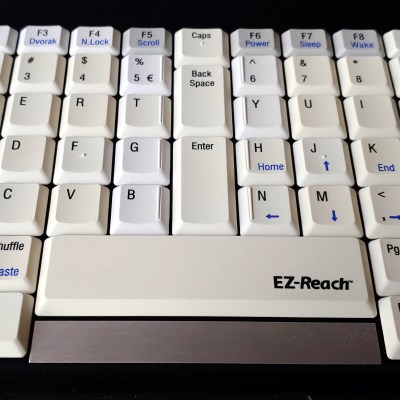 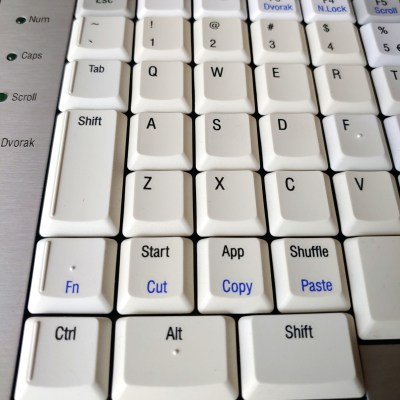 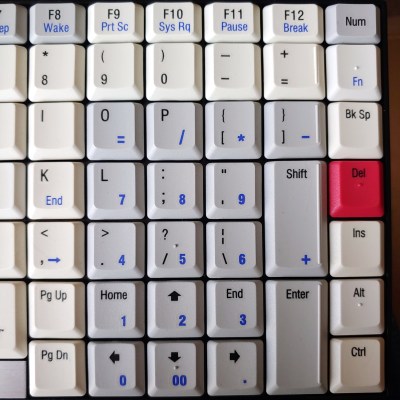 It’s interesting that there are no Dvorak labels on the keycaps given the built-in Dvorak layout. That would be a nice addition, and would probably make people like me practice Dvorak more often. There is a lot of function built into this 90-key layout, and some of the labels would be cramped, but I think labels would go a long way toward me actually taking the time to practice Dvorak.

If you already know Dvorak, you could leave it in DV mode and change the keycaps around, although that would mess up the whole inner keys homing bars thing and the number pad.

I think more people in general would try it out if the labels were there to remove the mystery. Fortunately, the company sells keyboard skins — rubber overlays that keep dust and dirt out of the crevices and come in your choice of labels. TypeMatrix claims that the typing experience is even better with the skin on, and people seem to like them quite a bit.

This extremely portable keyboard would likely fit in any backpack or laptop case. Once you put it on top of your keys, it stays firmly in place on rubber feet.

It’s small, nearly weightless at just over one pound, and is slightly less 1/2″ thick, but it’s not lacking for functionality at all. This thing has three Shifts, two Controls, two Alts, two Backspaces, two Functions, two Enters, and all the F keys.

The built-in copy/cut/paste functions are nice in theory, but actually using them would be in-ergonomic unless maybe you used the right-hand Function key and used your left index or ring finger to hit the cut/copy/paste keys.

At first clack, the switches reminded me of the Alphasmart NEO. After trying it out a few times, I decided the switches are merely okay and not as satisfying. They pretty much just feel like laptop keys, but at least they’re not staggered.

The keycaps actually feel nice. I think they might be PBT because they have that fine sandpaper finish to them. Plus, there’s no shine on the keys at all, and this thing is old enough to have a PS/2 connection. Maybe it didn’t get used much? Who knows.

I like the use of color to help you take in the layout at a glance and help you see the number pad easily. I’m not sure why some of the keys are a different color, though — the 5, 6, Y, G, and B are way less yellow than the others, but it’s probably just from age.

This keyboard’s worst design crime has got to be the giant space bar, because it wastes so much precious thumb key area. The unused space underneath is kind of an odd choice as well, though I suppose that it helps you find the arrows and bottom row keys without looking. My problem is that I can’t use either one of the Backspaces or Enters without looking.

If I were to redesign this keyboard, I would start by breaking up the Space slab to make room for more thumb cluster keys. I’d move Backspace to the left thumb, Enter to the right thumb, and probably relocate Delete and one each of Control and Shift. As it stands, Control and Shift are easiest to hit with the pinkies, which takes ergonomic points off in my book.

I’m conflicted about the number pad. I like the idea, but the execution is poor because that’s the only right-hand Enter. I don’t know or understand why there are two number locks. The one on F4 doesn’t seem to work in either QWERTY or Dvorak mode, and it doesn’t light up the Num LED. The Num key in the upper right does in fact unlock the number pad in both layouts and lights up the LED. The newer version of this keyboard is down to just the one Num key, and it also has Delete in the top middle, which is a great improvement. Although the TypeMatrix isn’t inherently programmable, there’s always AutoHotKey and other key-mapping programs.

This keeb is designed sit perfectly atop a laptop keyboard without blocking the track pad. I would say it does a really good job of that, but isn’t great for other settings. Since I’m normally on a desktop, I did all my typing tests there, and I had to put a 1″ binder notebook underneath to provide a bit of an angle so I could type at all.

Sorry, But There’s No Teardown Section

It’s easy enough to get into — there are only six Phillips-head screws on the back, after all. But of course, nothing happens unless you remove all the keycaps, and quite frankly, I’m afraid of breaking them or the scissor mechanisms underneath.

EZ to Reach for a Different Keyboard

I think I could eventually get used to this keyboard if for some reason I needed to leave the house and didn’t want to take my curvy girl out into the world.  However, I find myself typing pretty hard on this thing because of the unsatisfying scissor switches, so it would likely be just as loud. I tried to give it a fair shake, and I will say that it was easy to mess up certain letters even though I’m used to an ortholinear layout. I’m still faster on a standard, staggered keyboard than I am on this one, which is definitely saying something.

Soil Moisture Sensors, How Do They Work?

Actively Balancing A Robot With A Gyroscope