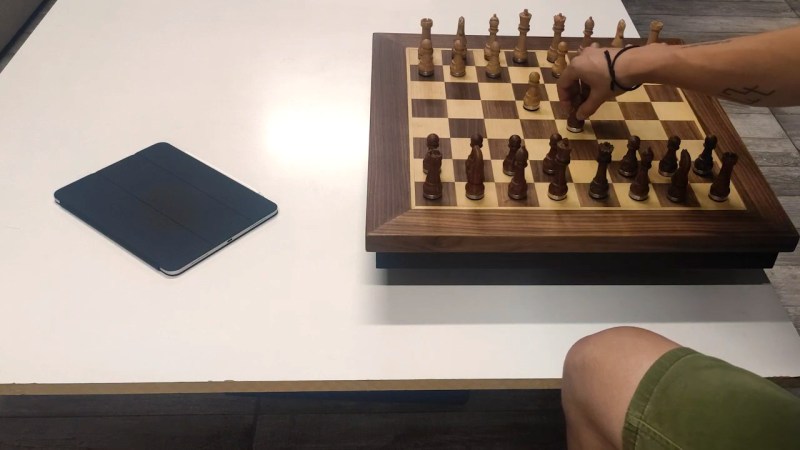 Playing chess online is all well and good, and opens up a whole world of competitors that would otherwise be unavailable in one’s local area. But there’s something to be said for playing over the board, which comes up often enough for many players that they refer to it with the acronym OTB. [Carlos] built an automatic chessboard by the name of Phantom, intending to bridge the disparate worlds of chess, from cyberspace to meatspace.

The basic idea is a chessboard that a player can use in the typical way, moving the pieces on the board as normal. The opposing pieces are then moved automatically to reflect an opposing player’s moves as received from an online chess server.

The board outwardly appears normal, with little to suggest anything is amiss. Only the metallic gleam at the base of each piece gives the game away. Pieces are moved by a SCARA arm hidden inside the board, which uses a magnet to drag them around from position to position. It’s quite something to watch the pieces glide around as if by magic, even more so when one is dragged off the board in a combat situation.

The system allows for seamless play, detecting when pieces are moved by the player via the Hall effect sensors, and reporting back to the chess server online. Similarly, when the game state is updated, the SCARA arm steps in to move the relevant pieces reflecting the moves of the distant player.

It’s a fun project, and one that will surely light up the many chessheads in the Hackaday community. We’ve seen other automated chess builds before too, like Trap Chess, in which pieces can suddenly fall from the board at any time. Video after the break.

John McAfee’s Wild Ride is Over