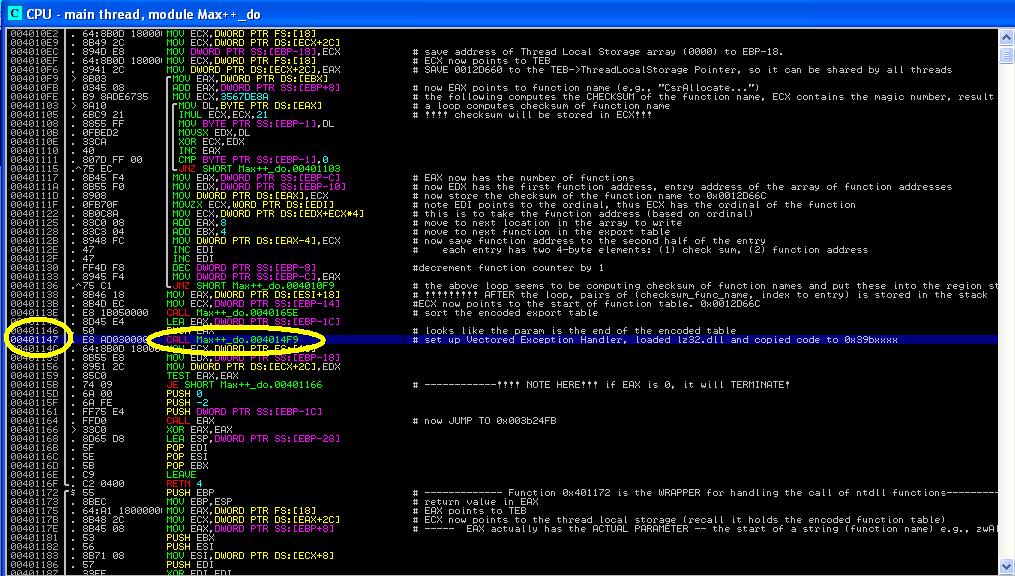 Learning Goals:
360 Mobile Vision - 360mobilevision.com North & South Carolina Security products and Systems Installations for Commercial and Residential - $55 Hourly Rate. ACCESS CONTROL, INTRUSION ALARM, ACCESS CONTROLLED GATES, INTERCOMS AND CCTV INSTALL OR REPAIR 360 Mobile Vision - 360mobilevision.com is committed to excellence in every aspect of our business. We uphold a standard of integrity bound by fairness, honesty and personal responsibility. Our distinction is the quality of service we bring to our customers. Accurate knowledge of our trade combined with ability is what makes us true professionals. Above all, we are watchful of our customers interests, and make their concerns the basis of our business.

1. Introduction
This tutorial explores several tricks employed by Max++ for confusing static analysis tools. These tricks effectively prevent static program analysis tools that plot call graph and extract system call invocation information of the malware. By “static” we mean that the tool does not actually execute/run the malware. Most “smart” virus scanners are static analysis tools. Many of them employ heuristics to tell if a binary executable is malicious or not by examining the collection of the system function calls in that binary. For example, if a binary invokes too many operations related to registry, then an alert should be flagged. If such analysis can be blocked, the malware can significantly improve its survival rate. Note that, however, such tricks cannot block “dynamic” tools which actually run the malware (typical examples include CWSandBox and Anubis).

2. Lab Configuration
You can either continue from Tutorial 9, or follow the instructions below to set up the lab. Refer to Tutorial 1 and Tutorial 4 for setting up VBOX instances and WinDbg. We will analyze the function starting at 0x4014F9.

3. Two-Layer Function Return
We now analyze the first trick of a two-layer function return which disrupts call graph generation. In the following we analyze function 0x00401838. Observe the instructions from 0x401502 to 0x401505 (in Figure 2). Our first impression would be that Function 0x401038 takes three parameters: a pointer to string “ntdll.dll”, 0x7C903400, and 0x7C905D40. However, later you will find that it is not the case: function 0x00401838 is simply used to confuse static analysis tools.

Figure 3 displays the function body of 0x401838. It starts with a call of 0x00413650 and then a bunch of other instructions (later, you will notice that these instructions will never be executed).

Now we have the interesting part. Look at the stack contents in Figure 5. First of all, starting from the third computer word, we have the three words pushed by the code earlier (they are pointer to “ntdll.dll”, 0x7c903400, and 0x7c905d40). Then you might notice that the top two words are the RETURN ADDRESSES pushed by the CALL instructions.

Each CALL instruction consists of essentially two steps: push the address of the next instruction to the stack (so that it can return when the function being called is completed) and then jump to the entry address of the function. Thus, it is not difficult to infer that 0x00401840 is pushed by the CALL 0x00413650 at 0x0040183B (see Figure 3), and 0x0040150A is pushed by the CALL 0x00401838 at 0x00401505 (see Figure 2). So the POP EAX will pop off 0x00401840 and save it to EAX. When the RETN instruction is executed, it is directly returning to 0x40150A (i.e., it jumps two layers back)! Clearly, the instructions starting from 0x00401840 are never executed and the two layer jumping can confuse quite a number of static analysis tools when they try to plot call graphs.

4. Invoking NTDLL System Calls using Encoded Table
Next we show an interesting technique to invoke ntdll.dll functions without the use of export table. We will analyze the instruction at 0x401557 (as shown in Figure 6), it calls function 0x4136BF. Later, you will find that function 0x4136BF invokes zwAllocateVirtualMemory without exposing the entry address of zwAllocateVirtualMemory explicitly and it does not use export table.

Now observe the function body of 0x004136BF in Figure 7. The first instruction is CALL 0x004136DC. You might notice that between 0x004136BF and 0x004136DC, there are some gibberish code. If you read it more carefully, you will find that they are actually the contents of string “zwAllocateVirtualMemory” where the byte at 0x004136C4 is the character “z”.

You could easily infer that function 0x00401172, given the name of a function, returns its entry address. Once it returns, the return value is saved in EAX. Then JMP EAX at 0x004136E1 will invoke the function.

The Danger of Third Party Scripts

The full statistic from our third party research

Get the Vaccine So People With Vaccines Aren’t in Danger

3D Printing with Kids on Lenovo Yoga 7i

What is HTTPS? | UpGuard