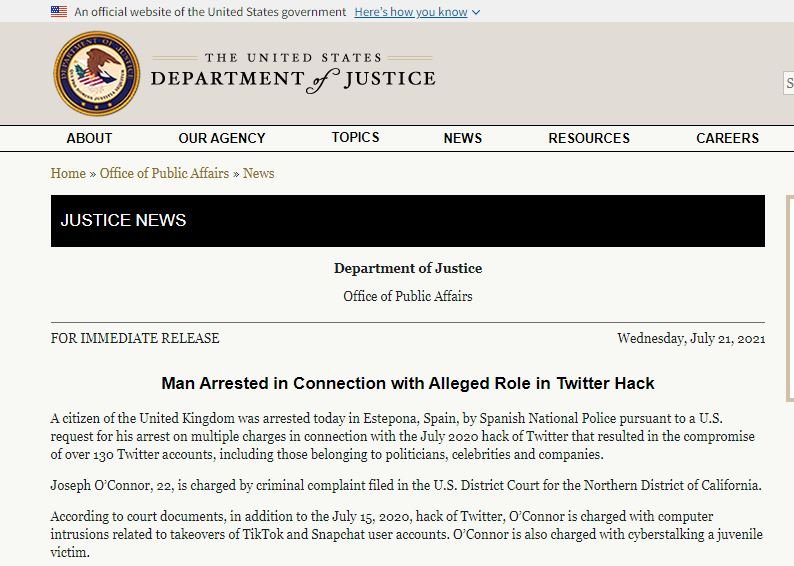 The U.S. Department of Justice (DOJ) announced the arrest of Joseph O’Connor, a British citizen accused of participating in a massive attack on Twitter that led to the compromise of multiple high-profile accounts. The 22-year-old defendant was arrested in Spain and will face multiple charges related to the attack on the popular social media platform.

US authorities claim the defendant was also involved in an ambitious campaign to hijack accounts on other social platforms, including Snapchat and TikTok.

Although no additional details were added about his role in the fraudulent scheme, the DOJ charges O’Connor with the following charges:

This is the fourth arrest related to this attack. The other three individuals arrested are Mason Sheppard, 19; Nima Fazeli, 22, and Graham Clark, also known as “Kirk” and whose age was not revealed. Sheppard is also of British origin, while the remaining individuals reside in The United States.

Prosecutors consider Kirk the mastermind of this attack, so they considered his capture a priority. After his arrest, the defendant pleaded guilty and was sentenced to three years in prison.

As some users will recall, this campaign was based on identifying accounts with short identifiers, usually taken by the first users to reach platforms such as Twitter in what is known as “Original Gangster” (O.G.). By identifying an account of interest, this gang proceeded to hijack the legitimate user’s account to modify the login credentials and sell the usernames in a community identified as OGusers.com.

These individuals reportedly compromised at least 130 high-profile accounts, including profiles of politicians, celebrities, tech executives and companies. Some of the OG usernames usurped by these hackers include @JeffBezos, @BarackObama, @JoeBiden, @Apple and @Uber, among others.

The post The 22-year-old who hacked Twitter network in 2020 was arrested in Spain appeared first on Cyber Security News | Exploit One | Hacking News.