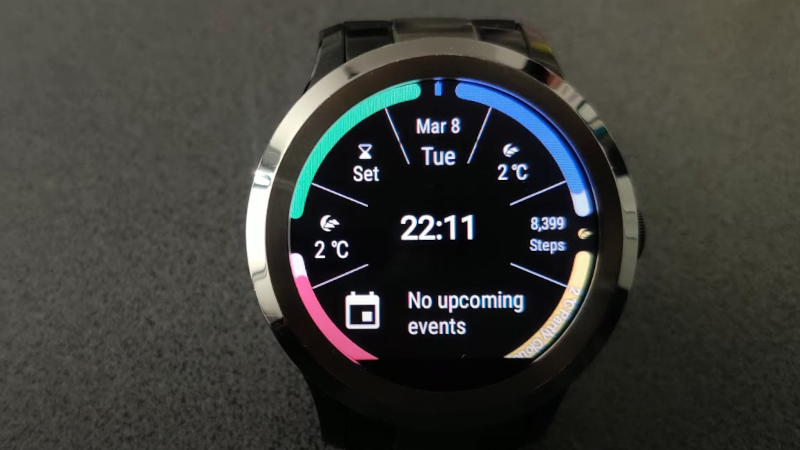 When you think about customizing the face of a smartwatch, you probably imagine something akin to selecting a new wallpaper on an Android device, or maybe tweaking the color scheme a bit. But not [Sebastian SARBU], his plans were a bit grander than all that. So he cracked open Android Studio and started writing a truly custom watch face that would make the most out of the device’s display. Luckily for us, he’s not only released the source code for others to study, but has documented the development process in a series of videos that you can see below the break.

He’s dubbed the new interface his “Pizza Watch Face”, as it breaks the circular screen down into slices complete with a bits of multi-colored “crust” that can show various notifications using the fewest pixels possible. There’s no question the layout is able to pack a lot of information into a relatively small space, and while aesthetics are naturally subjective, we happen to think it looks pretty slick.

While it might technically be the correct term as far as the templates in Android Studio go, we actually think calling this a mere “watch face” is something of a misnomer, as it’s really closer to a total UI overhaul. As [Sebastian] explains in the second video in his series, part of his design includes a refined interface for viewing data pulled in from other apps, such as battery level and weather conditions, allowing him to maximize how much information he can access with a minimum number of taps and swipes on the screen.

He even closes the video series off with a demonstration of how to upload the Android Studio project directly onto your WearOS device over WiFi, making this a valuable start-to-finish guide on custom face development even if you aren’t using his code. We’ve seen something of a mixed response to smartwatches in the community, but even if they aren’t something we all are particularly interested in, there’s no debate that putting more information about working with them out in the open is a net positive.

Of course, if you crave something truly bespoke, perhaps a custom open source smartwatch is more what you’re after.

Building the Most High-Tech Pond in the Neighborhood

A Deeper Dive Into Reverse Engineering with a CT Scanner